The homeowner knew that she had a moisture problem in her basement. The wood paneling that had hung on the walls since before she owned the home had been sagging and peeling for a long time. What she didn't realize, was that her problems only started with moisture. As she tore down the paneling, she found more than mold; she found foundation problems.

The wood paneling had hidden the fact that her block foundation was shifting and cracking in multiple places. Blocks were protruding out of the wall. Some had cracked and shifted. Some were pulling away from each other. Some were just crumbling away.

After seeing reviews for Frank's Basements Systems online, the homeowner decided to call and get an estimate for repairing her walls, as well as installing a sump pump and drainage.

During the intial inspection, our sales representative Frank found even more wall damage than the homeowner did. It was decided to install our Triple Safe Sump Pump System as well as 49 feet of WaterGuard drainage around her basement.

First, the team dug around the perimeter of the basement and removed the exisiting clay drainge pipes. The WaterGuard Below Floor Drain was installed above the "mud zone" to avoid it becoming clogged with dirt and debris like the clay pipe did. The WaterGuard system is also installed with inspection points to ensure if anyting did block the water flow, a quick inspection would catch the clog before the basement flooded.

Next, the Triple Safe Sump Pump was installed to pump the water out of the basement. As the hole was being dug, water from where the WaterGuard was being installed started flowing into the hole. The air tight lid on our patented sump system keeps debris out and moisture in to ensure your basement stays clean and dry.

After the cement was dry over the new drain and sump pump, masons came in to fix all the various wall problems.

Just because your basement walls are broken or shifted, doesn't mean your house is doomed! Call us today for your free, no obligation estimate on a clean, dry, usable basement! 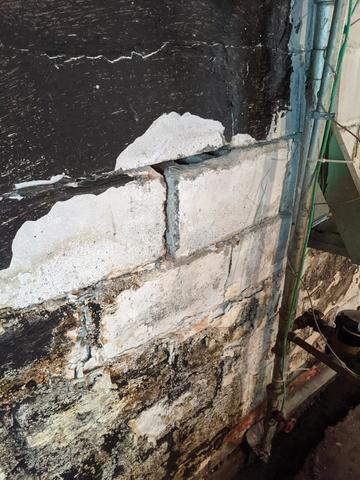 Water seeps through block walls and causes the blocks to shift. 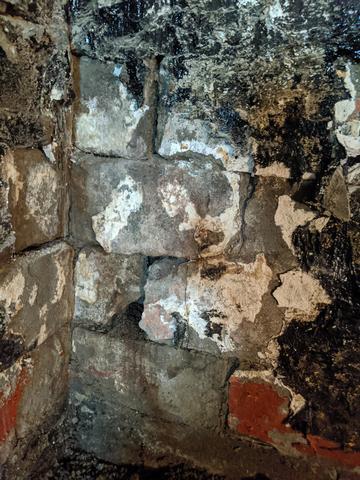 Broken blocks were found behind the paneling. 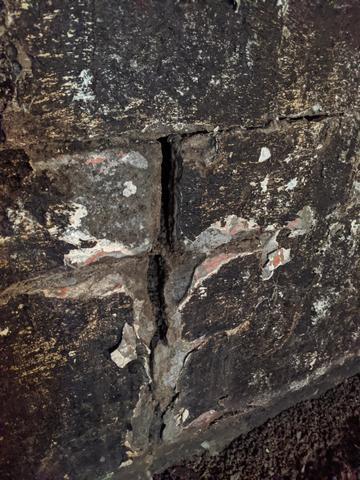 The mortar between these blocks is completely gone.